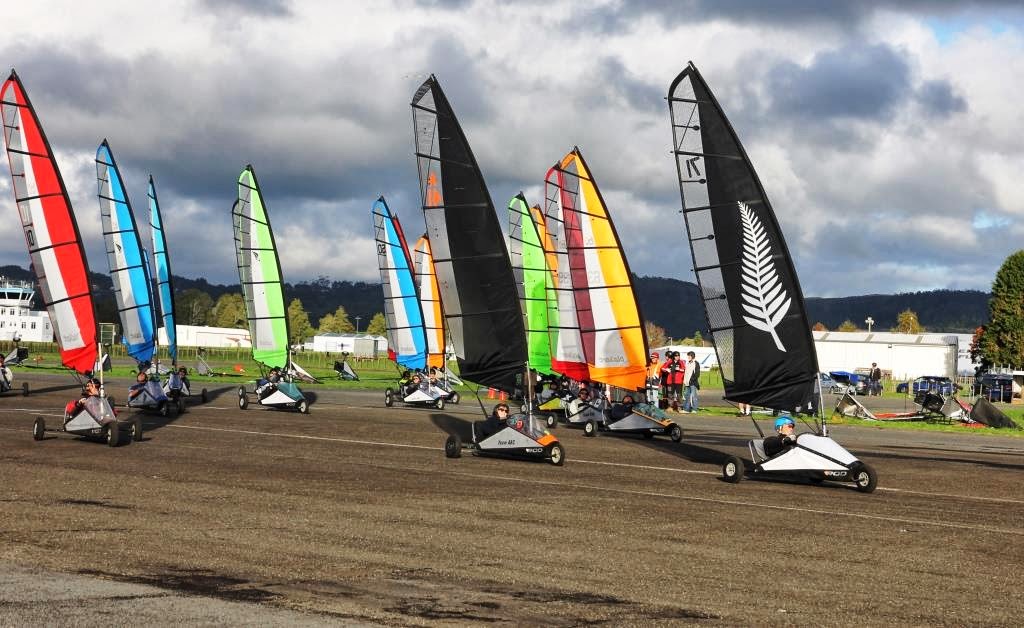 The rain passed over in the morning and by lunchtime Sunday the sun was out as everyone arrived for the Winter Series race day. With nearly everyone turning up we had close to 50 karts out racing. The wind didn’t reach predictions but was about 8-10 knts most of the day with the odd lull to keep everyone on their toes. 3 divisions racing, 17 races completed by knock off time of 4.30 and some close battles out on the track. C division is always good to watch with 8 students from McLeans College joining Matt and Natalya in the battle of the youth sailors. With several heavier sailors as well in this division the wind conditions tend to play a part in how the results come out, along with the growing confidence of Natlaya and Matt after a year in the karts. Tony won the start of the first race and was never headed. After this Matt and Natalya battled it out for the gun with both getting a turn crossing the line first. Lighter winds tended to suit Natalya with the 5.5 while Matt sailed away when it got to the 8-10 knt mark with a 4 metre which has seen better days. The lightweights had a big fleet and some good battles with Trevor nailing most of the starts but needing to work hard to keep ahead of Grant who came through for a couple of wins. There were various sailors battling for the minor places, often depending on how they were placed at the start. Heavy weight division only got in 5 races, with the 6th being stopped as the wind dropped away a bit, much to the disgust of those who had handled the condition ok. Wayne and Russell both got wins, often fighting it out with Nicko who was always close. Bruce was back into race mode but had an up and down sort of day, maybe a lack of practice. Overall a good day. Check out some of the photos from the day Results