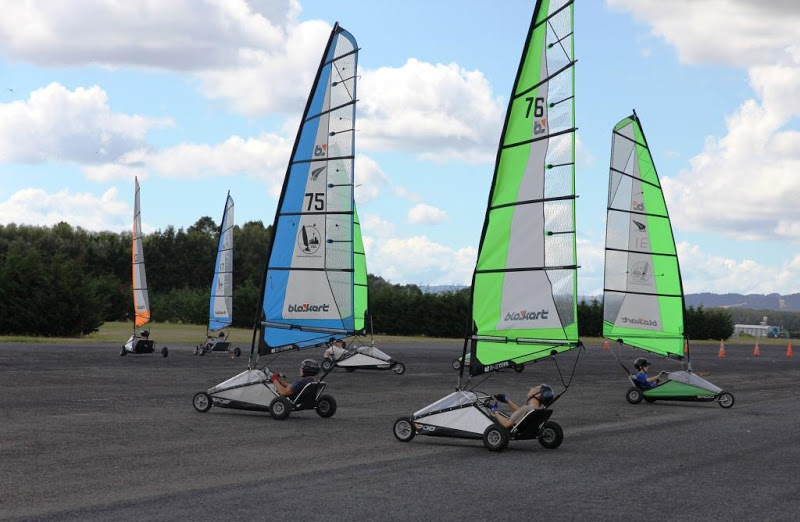 Lots going on at the Auckland Blokart Club over the last week or so. The Thursday night coaching started with a blackboard session and then some light wind practice, putting into practice what had just been covered. Of course, once out on the track most of the lessons went out the door as everyone tried to get the jump on the competitors. A successful night, finishing at about 7 pm as the wind died away. More coaching days will be arranged in the future for those new to blokarts and wanting to get a bit more competitive out on the race track.
With the Great Race being postponed because of wind direction the club ran the Ardmore Sprints on Sunday. We raced 2 divisions, deuce sailors and singles. Good to see Alex from McLeans Collage in his first races, Callum was back for another go and Mark and Kevin turned up to try this type of racing for the first time. With reverse grid standing starts and light winds it took the handicappers a while to get the start sequence right. Despite being held back a little more each start Nicko took out the first 4 races. Along with Ryan, Tony and Graeme, he managed to work his way through the field without a problem. These 4 showed what light wind sailing was about. It helped that in the last 3 races there was some wind shifts which the majority didn’t pick up, trying to tack to the far mark while it was an easy lay through. Sometimes the “windicater” is useful. Barry joined in after a couple of races and also started from the back working through to the front bunch most races. The last 3 races had a bit more wind which enabled some good speeds through the S bends.
The deuce division was down to 3 but this still created a very competitive field with the Hales showing the experience from the past, the Heilbrons being light and ghosting through the light spots and the new combination of Russell and Nick taking a while to get going but coming through at the end with a couple of lucky wins. Keeping the momentum going was all important as a deuce has limited acceleration in the light. Graham seemed to find a successful handicap formula, although it was hard to  figure out what it was, and the series ended with a 3 way tie. The day ended with a barbeque, prize giving and the keen ones staying out on the track until 4.30. Another good Ardmore Sprints Series. There will be more of these depending on wind and other events throughout the year.
Results Singles: 1st Nicko 2nd Ryan 3rd= Ray and Brian Deuce 1st= Hales, Heilbrons, Russell/Nick